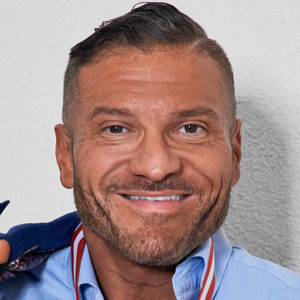 Most people know Anthony as a multi-millionaire successful real estate mogul, but that’s not all there is to him. Like many millions of Americans, Anthony struggled with his weight. For 20 years he prioritized his business at the expense of his health. Anthony has achieved great business expense, founding one of New York’s top real estate brokerages and expanding it to over 100 franchises in the most competitive region in the nation.

Anthony can be characterized by his two insatiable drivers: to be the best and to give back. Aside from the rapid expansion of his business, Anthony also:

As a move away from real estate, Anthony founded Lolli Brands Entertainment. He was no stranger to the media: from interviews, speaking engagements and contributions to print media, to winning the Viral Campaign of the Year at the PR World Awards – Anthony knows how to effectively use the media to spread a message. Since its creation, Lolli Brands Entertainment has worked with visionaries like Spike Lee, produced award-winning short films such as Cannes Film Festival nominee A Life for a Life, collaborated with stars like 50 Cent, Raekwon and Fat Joe and worked on hit television shows like Impractical Jokers.

The Other Side of The Coin

Despite Anthony’s external success, he was struggling. Growing up, he was always a bigger guy, but when he achieved business success, Anthony felt like it was time to focus on what really matters – his health. After numerous failed attempts to get fit: trying the latest diets, working with the best trainers and jumping on the new trends; Anthony wasn’t seeing results. On his 40th birthday, Anthony’s daughter looked at him and said “Daddy, you’re fat. I don’t want you to die.” That was the push he needed to radically transform his body and health.

Less than one year later, Anthony had lost 125 pounds and decided to commit his life to helping others in the same position. Unlike all the fit trainers and health coaches you see – Anthony’s just like you. He learnt the key skills needed to alter his daily habits to produce real, permanent changes; discovering simple techniques that anyone can follow, to help you lose the weight for good and feel amazing.

So now Anthony is putting what he has learnt on his fitness journey into practice. He has teamed up with James Hergott, the producer of Radical Body Transformations, an Amazon prime docuseries, to create the next season and build a community of people desperate to radically improve their health. Lolli Brands Entertainment has released a full length documentary about Anthony – ‘From Fat Lolli to Six Pack Lolli’ to share his story and experience with the world.

Fast forward to the present: Anthony’s happier, healthier and performs better in life, not just in business. He has since won physique and body transformation awards, going from fat to six pack fit. He has committed his life to helping others achieve success in their professional lives, it only makes sense that the next step is to help others achieve success in their personal lives, starting with what matters most – their health.