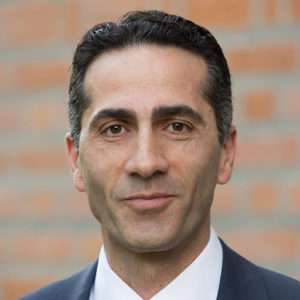 Armen Orujyan, PhD, is the Founding CEO of the Foundation for Armenian Science and Technology (FAST). FAST is a nonprofit organization that enhances Intellectual, Financial, and Network capacities of the science and technology ecosystem in Armenia and beyond.  Focused on assisting in creating an ecosystem that drives scientific advancement and technological innovation, under Armen’s leadership FAST has launched Startup Acceleration Programs inclusive of Startup incubators and accelerators focused on Artificial Intelligence (AI), Biotechnology, and Robotics, an Advanced Solutions Center on AI and Machine Learning, a Creative Campus, a Fellowship for the top 10% of all PhDs in Armenia in STEM, deployed numerous scientific grants, and established the first Science and Technology Angels Network in Armenia.

Armen is also the founder and former Chairman of Athgo Corporation, one of the world’s leading entrepreneurship platforms in consultative status with the UN Economic and Social Council, UN Department of Public Information, and the World Intellectual Property Organization. Athgo has advanced innovation ecosystems in Europe and Africa and established recurring Global Innovation Forums at the UN and the World Bank headquarters.  Armen’s pioneering initiatives have provided financial, intellectual, and network capacities to nearly 10,000 young innovators, entrepreneurs, and students from over 600 universities in 80 countries.

Armen applies his 25-year experience in entrepreneurship and his proprietary quantitative Individual Capacity and Intent methodology when architecting ecosystems to accelerate cutting-edge innovation in Fortune 500 companies and transformative inventions in startup businesses. He further provides strategic guidance on smart economic transitions to governments and leading global institutions.  Earlier in his career, Armen entered the national political arena serving as an advisor for various US political campaigns, including the Presidential.

In 2001, championing opportunities for youth and the disadvantaged, Armen initiated a human rights movement that brought over 40,000 young people and concerned citizens onto the streets of Los Angeles. Leveraging the power of social media and the convening power of youth, the movement has since turned into an annual observance, attracting over 150,000 galvanized people.

In 2006, Armen joined the UN’s Global Alliance for ICT and Development (GAID) as a Founding Member.  Under the auspices of the Chief Information and Technology Officer of the UN, he was appointed by the Secretary General of the UN and served through 2013 as co-Chairman of GAID.  He was also named a UN e-Leader for ICT and Youth and selected as one of top under-40 young leaders by Asia Society. Armen further served as a Commissioner on the UN’s venerated Broadband Commission for Digital Development through 2015.

In 2017, Armen joined Rice University’ Baker Institute for Public Policy as a Member of the Board of Advisors.  He is also a member of Asia Society’s Global Council.  Armen earned his Bachelor of Arts degree with Honors in Political Science from UCLA and received his Master of Arts degree as well as PhD from School of Politics and Economics at Claremont Graduate University (CGU). He is a recipient of CGU’s Distinguished Alumni Award.