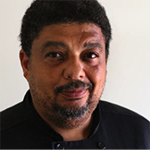 Chef Del Sroufe has been a vegan for years, but the lifestyle of owning a vegan bakery and the eating habits that come with it took its toll — at his peak, Sroufe weighed around 475 pounds. Through working with The Wellness Forum in his native Columbus, OH, and dramatically changing his diet, Sroufe has shed more than 200 pounds while maintaining a healthier vegan diet. His new book, Better Than Vegan, details the journey and the dishes that helped along the way. “It’s easy to fall into that trap of changing out unhealthy eating habits for unhealthy vegan habits,” Sroufe admits. “That happens all too often, and that’s what happened to me. If you eat the right diet, then it is better than vegan.”