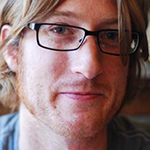 Brian Clark Howard is a wearer of several hats as an award-winning journalist, author, editor and producer. Growing up as an outdoorsy kid in the Midwest led Howard down a professional path that has always kept the environment close. Most notably, Howard has worked since 2011 as the editor and producer of nationalgeographic.com. “A lot of people say we have a long way to go in terms of energy and the way we live our lives,” Howard explains. “But I think people are much more mindful now. In that sense, [eco-awareness] is much more mainstream now. People can’t hide from the environment.”