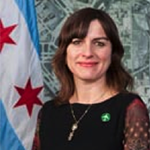 Chicago is a major hub for a number of airlines, and with not one, but two world-class airports in the city, it is also one of the busiest aviation centers in the world. Chicago Department of Aviation’s Deputy Commissioner of Sustainability, Amy Malick, is tasked with keeping the tremendous footprints of Chicago’s airports as green as possible. Chicago’s O’Hare International is the second-busiest airport in the world — more than 67 million passengers and 1.2 million tons of cargo passed through its concourses in 2012. Across town, Midway Airport, which Malick refers to as the “busiest square mile in aviation,” serves more than 19.5 million passengers annually. The Sustainable Airports Manual, developed in Chicago in 2003, is now the go-to resource for building and redeveloping airports the environmentally sustainable way. “Aviation in general probably doesn’t have the greenest reputation in the world,” Malick admits. “We do operate these massive, 24/7, mission-critical facilities that are always going. Our focus has been to reduce the impact of all of those things that go into running an airport on a daily basis.”