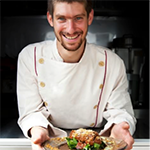 Inspired by his wife’s veganism, chef Adam Sobel created a stand at the Red Bank, NJ, farmer’s market that soon progressed into his New York City-based vegan food truck, the Cinnamon Snail, in 2010. Now, four years later, the Cinnamon Snail is New York’s #1 rated dining establishment on Yelp.com, and Sobel’s long lines in New York and New Jersey prove it. “So many of our customers aren’t yet vegans, and they get talking with each other,” Sobel says. “That’s part of our purpose — bringing this food out into the community and getting people to check it out and fill in the blanks as to why we do vegan food.”