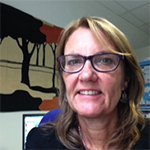 Head of the Secretariat

Helena Molin Valdés is Head of the Secretariat of the Climate and Clean Air Coalition to Reduce Short-Lived Climate Pollutants (CCAC), based in Paris, France. She is an experienced leader within the United Nations system and a long-time proponent of sustainable development, climate change mitigation and adaption, and disaster reduction. She has been instrumental in the CCAC’s explosive growth over the past year. Prior to joining the CCAC, Molin Valdés was instrumental in making the United Nations Office for Disaster Risk Reduction (UNISDR) an important force in global disaster management, holding various positions with the organization, including Acting Director and Chief of Advocacy and Outreach. Molin Valdés has authored, co-authored or coordinated many papers, handbooks, global reviews and reports on local development, sustainable development, disaster risk reduction and resilience. She has worked extensively with both The UN Environment Programme (UNEP) and the Intergovernmental Panel on Climate Change (IPCC) and has organized and led international delegations and events, including at RIO+10, Rio +20 and several of the UNFCCC COPs. Early in her career, Valdés headed a Swedish development NGO, Association Nicarauac, some of whose work involved improving traditional brick production and cookstoves, a key focus for the CCAC. She is an architect by training, with a degree in architecture and urban development from Lund University. She speaks English, Spanish and Swedish.
Thanks for subscribing!