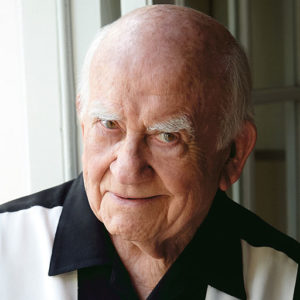 One of the most honored actors in the history of television, Ed Asner has been the recipient of eight Emmy Awards and 16 nominations, as well as five Golden Globe Awards and he served as National President of the Screen Actors Guild for two terms. He was inducted into the TV Academy Hall of Fame in 1996, and he was honored by the Screen Actors Guild as the 38th recipient of the prestigious Life Achievement Award for career achievement and humanitarian accomplishment.

Asner is best known for his comedic and dramatic talent as the gruff but soft-hearted journalist Lou Grant, the role he originated on the landmark TV news room comedy The Mary Tyler Moore Show, and continued in the newspaper-set drama Lou Grant, which earned him five Emmys and three Golden Globe Awards. Asner received two more Emmy and Golden Globe Awards for the mini-series Rich Man, Poor Man and Roots.

On the small screen, he continues to work, including co-starring opposite Rosario Dawson in the USA TV series, Briarpatch, and was previously in the Netflix comedy series Dead To Me opposite James Marsden, Linda Cardellini and Christina Applegate. Some of his guest star appearances include Cobra Kai, Bones, Criminal Minds, The Good Wife, Law & Order S.V.U., Hawaii Five-O, and Royal Pains. His voice is also featured on such prominent animated series as: American Dad!, SpongeBob SquarePants, The Cleveland Show, Spider-Man, Family Guy and many more.

Asner also starred in the Broadway show Grace opposite Paul Rudd and Michael Shannon and more recently toured in the one man show, FDR as well as God Help Us and A Man And His Prostate.

In addition to his long and celebrated television career, Asner has also appeared in motion pictures, including: The Slender Thread, El Dorado, They Call Me Mister Tibbs, Fort Apache the Bronx, JFK, Elf (as Santa Claus), and was the voice of Carl Fredricksen in the celebrated Academy Award winning Best Animated film, Up! in 2009.

A native of Kansas City, Asner is also a U.S. Army veteran of World War II.