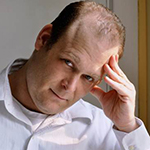 For “Green Living Guy” Seth Leitman, the green journey started as a child and blossomed during his Master’s program, where he became interested in different governments’ lack of eco-responsibility. His professional life has seen him focus on green transit, indoor air quality programs, green-building tax credits and a now series of green-minded books. Since his first appearance on Green is Good in 2011, where he promoted his first book, Leitman has penned eight more eco-focused books. “It is more profitable than you can imagine to go green,” Leitman reveals. “That’s one of the things I always notice: the numbers. The numbers don’t lie.”