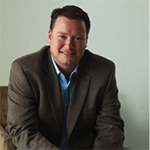 Darren Crouch is President and co-founder of Passages International Inc. an innovative company specializing in the design and manufacture of environmentally-friendly and biodegradable funeral merchandise. Founded in 1999, Passages has focused on creating eco-friendly urns, caskets and memorial items for those families opting for less traditional funerals. It has helped funeral homes integrate green marketing and merchandizing into their traditional funeral offerings. Darren is also the founder of aGreenerFuneral.org, a website designed to educate consumers about options for greening their funeral and connecting these consumers with Partner Providers of aGreenerFuneral. Over the past several years, Darren has been published in The Director Magazine, The American Funeral Director Magazine, Funeral Business Advisor, The Cremationist and the ICCFA Magazine. He has also been quoted in both The New York Times and The Wall Street Journal and has spoken at several national and international conventions including the Asia Funeral Expo, the National Funeral Directors Convention and the ICCFA Convention. Darren holds a B.Sc. (Hons) degree from Manchester Metropolitan University in Manchester, England, and now lives in New Mexico: an area renowned not only for its exceptional beauty, but also for its leadership in solar power, green building and design. With offices in Europe and North America, Passages International, Inc. continues to grow and is a global leader in green and environmentally friendly funeral products. How did you first get involved in the green industry? Growing up in Africa, I have always been aware of the earth’s precious resources. Although, where I lived had vast mineral wealth in the form of diamonds (and others), it was prone to severe drought and, as a result, famine. I learned at a young age to conserve water. We used to water our yard, by hand, using greywater captured in 55-gallon drums outside the bathroom. Power outages were also common and electricity was not taken for granted. What interests you most about being green? I am interested in conserving the earth’s resources by creating products that are produced from sustainable materials. If we do not do this, we will deplete our resources and lead to the destruction of ecosystems and many of the species in them. What is your biggest “green” pet peeve? That many green products are more expensive than their conventional equivalents. What green trend is most exciting to you or your industry? When I first started doing this back in 1999, we were telling funeral homes that they needed to be offering greener alternatives to traditional merchandise (urns and caskets). Today, more and more funeral homes are calling us saying that consumers are asking for green burial or biodegradable urns. The trend is definitely toward greener funerals. AARP did a survey in 2007 and found that over 21% of respondents were interested in a greener end-of-life ritual. This is reflected in the increased number of green cemeteries. It has risen considerable from four or five in the late ’90s to well over 100 today.
Thanks for subscribing!