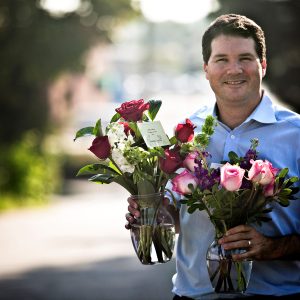 Random Acts of Flowers (RAF) is a 501(c)(3) charity that improves mental health through the power of giving flowers. RAF volunteers collect donated flowers from weddings, memorial services, florists, special events, grocery stores and churches to recycle and repurpose them into beautiful bouquets for delivery to patients in area hospitals, nursing homes and hospice care centers. As a recycling “green” charity run almost entirely by volunteers, Random Acts of Flowers is committed to nourishing the health of the environment, individuals and the community. In July 2007, Random Acts of Flowers’ founder Larsen Jay was in a near-fatal accident. While confined to his hospital room, the outpouring of support that Larsen received in the form of daily visitors and dozens of floral arrangements immediately aided in his long recovery. When Larsen was capable of leaving his room, he noticed how many of his fellow patients did not have visitors or flowers – the very thing that helped him so much in those early and difficult days. Within moments, the first “random act of flowers” delivery was made, repurposing his flowers and delivering them to patients in nearby hospital rooms. The memories of how a simple gesture touched his fellow patients compelled Larsen to form Random Act of Flowers in 2008.
Thanks for subscribing!