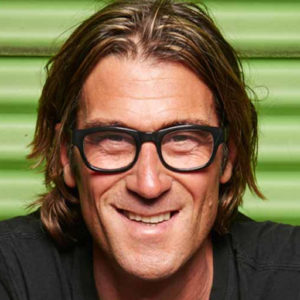 Rich is a world-renown, plant-based ultra-endurance athlete, in-demand public speaker, wellness advocate, #1 bestselling author and inspirational hero to a global audience of wellness seekers as a transformative example of courageous and healthy living.

After succumbing to the sedentary throes of overweight middle age, at age 40, Rich made a decision to overhaul his life, adopting a plant-based diet and reinventing himself as an ultra-distance endurance athlete. Just a few years later, Rich stunned the multisport community with top finishes at the Ultraman World Championships, a 320-mile, 3-day double ironman-distance triathlon widely considered one of the most grueling endurance events on the planet. In 2010 Rich topped this feat and cemented his place in the pantheon of endurance greats when he was the first of two people to complete EPIC5 – a 703-mile adventure of well, epic proportions that entailed completing 5 ironman-distance triathlons on 5 separate Hawaiian Islands in under 7 days total.

Rich chronicles his journey in Finding Ultra: Rejecting Middle Age, Becoming One of the World’s Fittest Men, and Discovering Myself (Crown Archetype, 2012) — an inspirational memoir of heroic plant-fueled athletic prowess which quickly became a #1 bestseller and has been translated into six foreign languages. Not only did this book completely change the way people think about diet, fitness and elite athletic performance, it serves as a powerful example of the indelible power of the human spirit to face and overcome life obstacles, including alcoholism and financial devastation; the courage to shed the mantle of social expectations; and the ability within all of us to discover, unlock and unleash the best, most authentic version of ourselves that dwells deep within.

Picking up where the book leaves off, in 2012 Rich launched the wildly popular Rich Roll Podcast, currently topping charts on iTunes. With over 5 million downloads to date, Rich is touching and changing the lives of a passionate devoted audience that spans the globe.

Hitting shelves spring 2015 is Rich and his wife Julie’s first cookbook: The Plantpower Way (Penguin) – a plant-based primer for the active modern family.

A graduate of Stanford University and Cornell Law School, Rich’s feats of boundary-pushing athleticism have been featured on CNN and in the pages of Men’s Journal, Men’s Health, Outside, Triathlete, VegNews, Sweat Equity, Chatelaine, The Los Angeles Times Sunday Magazine, The Huffington Post, Stanford Magazine, 3/GO Magazine, Sweat Equity and Men’s Fitness Magazine, which named Rich as one of 2009’s “25 Fittest Men in the World.”

Along with his wife and four children, Rich resides Malibu Canyon outside of Los Angeles. When he isn’t writing, podcasting, traveling the world as a public speaker or spending time with his family, you can find him lost on the remote trails of the Santa Monica Mountains.