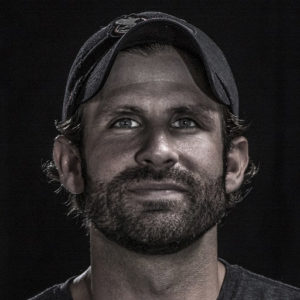 Former Navy SEAL and Founder of two nonprofit organizations benefitting Veterans and First Responders, Ryan “Birdman” Parrott is originally from Detroit, Michigan. Birdman enlisted in the Navy after watching the Twin Towers collapse on 9/11 and served eight years as a U.S. Navy SEAL attached to SEAL Team SEVEN, completing three combat tours to Iraq before being assigned to Advanced Training Command as an Instructor.

In 2005, while serving in Iraq, Birdman was riding atop a Humvee manning the gun turret in enemy territory, when his vehicle was hit by an improvised explosive device (IED), causing a detonation and throwing him from the Humvee. Birdman regained composure with his face and hands burned and witnessed his fellow team members suffer devastating burn and blast injuries. His entire team survived their injuries and went back to operating.

In 2012, Birdman established Sons of the Flag to help Veteran and First Responder burn survivors and their families find the help and medical attention they truly deserve. He recognized that burn care treatments and advancements had not been evolving as other forms of injuries, so he made it his mission to do something about it!

He is also the founder of the Birds Eye View Project, addressing the needs of Veterans and First Responders through extreme sports.

In the midst of running two nonprofit organizations, Birdman also authored “Sons of the Flag: Real Accounts from the last 100 years of American Service”, a book dedicated to relaying a selection of real stories of American Heroes.

Then, Birdman had a special calling because of a teammate and dear friend that he lost too soon. Now a sponsored athlete in the extreme sports arena, he has founded The Human Performance Project. This Human Performance Project will encompass taking a deeper dive into health and wellness giving our next generation a better understanding and roadmap on taking proper care of their bodies through physical, mental, emotional and spiritual guidance from world renowned experts in their fields.

Ryan “Birdman” Parrott plans to achieve impossible—to run a marathon, swim a race, and perform a skydive … on each of the seven continents… in just seven days.

Ryan will test the limits of his skill and endurance in the pursuit of a question: What can human physiology teach us about mental health and the brain’s capacity for healing traumatic injury?

A former Navy SEAL sniper, Ryan has devoted his post-military life to veteran and first responder causes. He grew up in Detroit nurturing a sense of patriotism, and like many operators, he joined the Navy after 9/11. Both of his grandfathers served in World War II and ever since he was young, he had his sights on the Navy SEALs. After the towers came down, he enlisted. After making it through BUDs, he was assigned to SEAL Team 7 out of Coronado.

On his first combat deployment in Iraq, Ryan was manning the gun turret on a Humvee when his convoy rolled over an IED. When it detonated, the force of the explosion sent him flying from the turret as if shot from a cannon, straight into the air. Recovering at the hospital from burns to his face and hands, someone who’d witnessed the attack called him “the Birdman.”

That moment—paired with the low-hanging fruit of his last name—created a name that stuck. And after his military career was over, Ryan became dedicated to caring for wounded veterans. He founded Sons of the Flag, a nonprofit focused on burn care for wounded Americans. The nonprofit has helped thousands of burn survivors and funded over $800,000 worth of medical fellowships.

Even immersed in the nonprofit world and caring for veterans, firefighters, and first responders who’ve suffered injuries, Ryan found himself struggling from his own. He found himself newly irritable with friends and loved ones. “Back then, you didn’t talk about trauma. But I could feel that something was wrong,” he recalls. “I felt hostile, like I wanted to fight everyone.”

In 2019, Ryan got a phone call from one of his teammates. His sniper partner, David Metcalf, had taken his own life.

“David was my true north,” he remembers. “We all have mentors we consider invincible, and then they’re not there anymore, you lose that sense of strength they provided for you.”

But ever curious by nature and motivated to seek a change, Ryan decided to unpack the nature of his trauma. In the aftermath of David’s death, Ryan decided to explore his own physiology as a way to understanding his psychology.

Even before military service took him to warzones, Ryan was always a thrill seeker. But in his post-military life, he took it to an extreme level.

“It takes a certain kind of daring to do base jumping,” he says. “I was terrified before my first big jump. I was 2,800 feet up on that mountain wondering how the hell I got myself into this.”

But somehow, Ryan found the resolve to make the leap, and he discovered a kind of flow state that many adrenaline junkies describe in the middle of extreme feats. The breathing slows. The focus narrows. You think of nothing else except the moment. When he’s in mid-flight, the terrain rushing below him at 140 miles per hour, Ryan no longer thinks of how irritable he is. There’s no hostility. No anger. Just the flow of air over his wingsuit and the thrill of the ride.

Ryan pursues extreme feats and pushes his physiology to the limits to gather data on how the human body recovers from stress and adrenaline.

With his eyes set on the incredibly ambitious 7X Human Performance Project, Ryan will join four other former operators to achieve the seven-continent journey, pushing their bodies to climates from scorching hot to freezing cold, and dealing with the extreme differences in altitude and barometric pressure. The entire mission is in pursuit of data that they’ll immediately share with the medical world to better understand how physiology can affect brain health.

Producing a full length documentary on the journey and how the outcomes research was collected.

Anyone struggling with a suicidal crisis or emotional distress can call 988 for help. Ryan can be contacted at ryan@americanextreme.com.