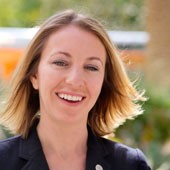 Dominique Smith, Executive Director of the U.S. Green Building Council – Los Angeles, has extensive executive and consulting experience, specializing in business and strategic planning, fundraising, nonprofit technology and Internet strategy, and organizational development. During her tenure she has doubled USGBC-LA’s membership, broadened its influence and cemented its role as a leadership voice in the global sustainability movement. USGBC-LA’s LEED green building program has been the cornerstone of Dominique’s efforts. Since its national launch, more than 2,000 local commercial and residential projects participate in LEED. Nearly 3,000 LEED professional credential-holders are engaged in advancing this global movement.
The scope of work at USGBC-LA reaches beyond LEED to include a robust network, participation in the Center for Green Schools, the Center for Green Building and Human Health and the development and deployment of a variety of technology platforms. As Executive Director, Dominique will be leading the Chapter as it prepares for and hosts the 2016 Greenbuild Conference and Expo in Los Angeles. Greenbuild is the world’s largest conference and expo dedicated to green building and draws tens of thousands of people annually. Dominique serves on numerous boards and advisory committees, including the Los Angeles Regional Collaborative and the Green WEST Alliance. Dominique is the VP Foundation for the San Gabriel Valley Delta Gamma Alumnae Group.
Thanks for subscribing!