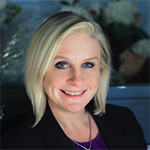 Eva Radke received a BFA with a concentration in film theory from the University of Texas in 1993 and has lived in New York City since 1994. She worked in the film and commercial production business for 15 years – the last 10 concentrating on the art department in most categories – designer, scenic artist, set decorator and chiefly art department coordinator extraordinaire. In January of 2007 Eva created Art Cube, an online collaboration resource for film professionals to crowd source and divert waste production to production. To date, Art Cube has expanded to nine other locations: Los Angeles, Chicago, Philadelphia, Austin, New Orleans, Miami, Atlanta, Detroit and the UK. In May of 2008, Eva founded the not-for-profit brick and mortar establishment Film Biz Recycling and since then has diverted over tons from 1000’s productions of unwanted building materials, set dressing and wardrobe from an uncertain fate – most likely a landfill. About 60% of the items received get re-distributed to other non-profits, arts programs and re-use centers. Film Biz Recycling was recognized by the EPA with an Environmental Quality Award in 2014. Additional recognition include The Lower East Side Ecology Center and CAMBA women’s shelter for her environmental and social endeavors. Eva has spoken on panels for the Producer’s Guild of America, SXSW Film, The Woodstock Film Festival, and The Made in New York PA Training program. She also has spoken at The New School, The School of Visual Arts and on Entrepreneurism, Organizational Development and Social Innovation. Film Biz Recycling has eleven employees to date, proving that diverting entertainment waste from landfills has value, creates green jobs, reduces green house gasses, and saves money for the productions in the process. Film Biz Recycling has been featured in The White House Blog, The LA Times, NY1, Oprah Magazine, Interior Design, Lucky magazine, The Village Voice’s “Best Junk Shop”, New York Magazine’s Best of as “Best Cast-off Furniture” Ready Made magazine, Time Out New York, NBC’s LXTV, and other shopping guides as a green source for interiors and decorating.
Thanks for subscribing!