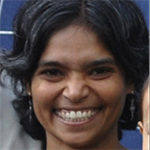 Keya Chatterjee has a unique spin on the ‘big picture.’ In her case, she’s talking about satellite images of planet Earth. Before joining WWF, she worked for NASA and used the images to communicate research results on climate change. The detailed images of deforestation, sea ice loss and development gave her a unique perspective on the state of the planet. This visual representation of our human impact motivated Keya to shift her focus from plot-level projects to the planet as a whole. Today, Keya is part of WWF’s climate team, working on every level — local to global — to bring awareness about climate change to the masses and facilitate progress at the highest levels of government toward a new global climate treaty. She can talk in amazing detail about the climate change impacts we are already experiencing; the need to drastically reduce emissions worldwide; the links between climate change and poverty; and the barriers we need to overcome to reach a real global climate agreement. When you look at the science on which the WWF climate program is based, it can appear daunting. The impacts are increasingly visible — longer forest fire seasons in the U.S. West, hurricanes that are more and more damaging, sea level rise, coral bleaching, and melting sea ice just to name a few. Yet Keya remains optimistic, “We’re in control of our fate here” she likes to say, and WWF is on the front lines talking about the sustainable choices we can make as individuals, corporations and governments to reduce greenhouse gas emissions and prepare for what’s to come. Whether it’s learning from people in lowland communities how to adapt to rising sea levels or being part of a delegation to multilateral climate discussions, Keya is looking at the big picture — for people and conservation around the world. Keya is also a regular contributor to mothering.com, where she writes about climate change and motherhood. How did you first get involved in the green industry? Working at NASA, I studied detailed satellite images of the planet and could literally see deforestation and sea ice loss as they happened. What interests you most about being green? I’m committed to making sure my son has a future. The planet is not a lost cause. We can change direction; it is possible, and we can all do something. It’s that potential that excites me so much. What is your biggest “green” pet peeve? My biggest pet peeve is the perception that leading a low-footprint life is too difficult or a terrible burden. It doesn’t have to be. Simple changes in habits can make a huge difference. What green trend is most exciting to you or your industry? The plunging cost of solar power. Since I bought my solar panels in 2008, the cost has dropped 80%. In 15 states homeowners can get solar for no money down and still save on their electric bill. Solar is not only the ethical choice, it’s also the economic choice. People are saving money and saving the planet; nobody can argue with that.
Thanks for subscribing!